skip to main | skip to sidebar

The end of the earth

I am currently in an internet cafe in Puerto Natales. We took a bus here this morning from Punta Arenas, a city of 125,000 at the far Southern end of Chile. It´s at around 51 degrees south latitude. Yesterday we took a ferry to an island in the Strait of Magellean that has something like 100,000 penguins nesting on it. It was very, very cool. The penguins are quite tame, so we could get pretty close to them. And they´re very, very cute. We saw some Chliean Skuas and some other very cool birds. We got some good pictures, but there´s no easy way to post them right now.

Tomorrow we will head off to Torres del Paine national park for six days and five nights of trekking. It should be great. From all that we´ve read and seen and heard it seems amazingly beautiful. I think we have all the gear we need and since we can leave some stuff at the hostel we´re staying at our packs will be heavy, but hopefully not unbearable.

On the bus ride this morning I saw some rheas and some flamingos. Both are very weird looking. The flamingos, when in good light, almost glow. And Rheas are just odd. I don´t understand how such a large, flightless bird can survive the winter here.

Speaking of winter, it´s the first day of summer here, but it´s remarkably chilly and windy. The weather is actually pretty nice, but if this is summer weather, winters must be really tough. I don´t think it snows much down at sea level, but the darkness and the wind must be difficult. Both Punta Arenas and Puerto Natales are nice but quite weather-beaten. Lots of faded paint and trees bent by the wind.

It´s a little after 9pm and it´s still very light outside. The sun sets around 10 and it doesn´t get fully dark until 11pm. Nevertheless, it´s time for us to head back to our hostel, do some final packing, and try and get to bed early. Our bus to the park leaves at 7:15am.
Posted by dave at 6:57 PM 1 comment:

I've made it to Santiago. Getting to Boston was a snowy adventure. I'm kinda amazed that the bus made the Portland to Boston leg. The snow looks thick and slipper and there were many cars that had slid off the road. But once I made it to Logan the trip was fairly smooth. My flight was delayed somewhat out of Boston, so I had a very tight connection in Miami, but I made it.

Santiago has been nice so far. In some ways it reminds me of Mexico City, in some ways of New York. We've explored some and had some pretty good food. We're currently in Abarzua, a nice cafe-bar near our hotel. They have good coffee and free wireless.

Tomorrow we fly south to Punta Arenas. We'll spend two nights there. In between there's a cruise out to a penguin colony. Should be very cool.

Time to finish coffee and head out in search of dinner.
Posted by dave at 5:29 PM No comments:

Tomorrow I leave for a two-week trip to Chile. I've spent the last day or so pretty frantically trying to finish up all sorts of things before I leave. I've had mixed success. While I have gotten a lot of things done, there are some other projects that I really had hoped to make more progress on. As is often the case, lots of little important things get in the way of larger, longer-term things.

Anyway, it's 11 degrees outside right now. And tomorrow we're supposed to get nailed with a big storm. Much snow and wind, with some ice and a little bit of rain, too. I think I can make it out of Maine before it gets too bad. My flight is out of Boston, and I'll drive to Bangor and take the bus. But to try and beat the storm I'm going to take the earliest bus of the day, which is 7:15 am. Ug. If I can make it to Boston I think I'll be ok, since it seems like the storm is going to be mostly rain there. But it's hard to tell. I think a lot of coastal New England will be right on the edge between rain and snow.

I suspect I'll sleep very little tonight, as I still have a lot of packing to do. This isn't that big a deal, since I'll have lots of time to sleep during my journey.

I'm looking forward to the trip a lot. I think we'll see some really cool things. The centerpiece of the trip is doing a trek in the Torres del Paine park in Patagonia. If I can get online during our travels I'll post some pictures.
Posted by dave at 9:04 PM 1 comment:

This is awesome. It's a gallery of many pictures of children sitting on various department-store santa's laps bawling and/or looking terrified. Don't look at just one---scan through lots of them for the full effect.

(Via Kieran Healy at Crooked Timber.)
Posted by dave at 10:51 AM No comments:

I've been talking with lots of studnets over the last month who are applying to graduate school and I'm in the midst of several letters of recommendation. So I've found myself giving lots of grad school advice---mostly about how to get into grad school. But today I found some great advice for students who are already in graduate programs: How to get a PhD and save the world. The post is by Chris Blattman, who is an assistant professor of political science and economics at Yale.

I found this via Greg Mankiv's blog. Greg is a professor of economics at Harvard and formerly was chair of the council of economic advisors under President Bush. I probably disagree with Mankiv politically on almost every issue, but he's very smart and posts interesting stuff.
Posted by dave at 1:02 AM No comments:

Some more press for COA

There's a nice article about College of the Atlantic in Plenty, an online and paper magazine about sustainability and green living and such. There are a few amusing comments, but nothing about avatars, which is a relief. Overall, I think it's a good article and a pretty accurate portrait of the college.
Posted by dave at 8:50 PM No comments:

Well, I'm finished with my narrative evaluations. Fall term 2007 is officially behind me. Time to celebrate with a Fin du monde. Tomorrow I turn my full attention to other writing projects, including letters of recommendation and some referee reports.
Posted by dave at 12:23 AM No comments:

The "U" on my laptop's keyboard just snapped off. I can still type "U"'s by pressing on the button that usually lives beneath the square plastic thingey with "U" on it. But it's not easy to type fast. Fortunately, "U" isn't that common a letter. Nevertheless, I'm not thrilled with the situation. It seems like the key should snap back on, but I haven't been able to get it to snap yet. Arg.

In other news, I'm done with Linear Algebra evaluations and am making slow but steady progress on the Human Ecology evals.
Posted by dave at 1:49 PM No comments:

I've submitted my Physics evaluations and I'm almost done with my Linear Algebra evals. I have a lot of work still to be done on my evals for the Human Ecology Core Course. This will be the main task for tomorrow. I also finished a letter of recommendation today. The student is applying to a around dozen schools, so I still have to send off other copies. But once the first version is written making the slight changes necessary for other schools is pretty easy. I think I have at least four more students for whom I need to write letters next week.

There was a little bit of a thaw today which resulted in some rather spectacular icicles hanging off our house. Although I like icicles, it's not good for the roof to have them hanging off the eaves. Icicles are heavy, since they're basically water, and water is heavy. So I knocked the icicles down. It's sad to see them, but it's for the best.

It's late, but I still have some energy, so I'm going to try and get a little bit more work done.
Posted by dave at 11:05 PM No comments:

Beginning the final push to finish narrative evaluations. They're due Monday. And I have more than a few letters of recommendation to write. So I'm caffeinated and trying to make the most of my hyperness and short attention span by working productively on several things at once. So far, so good.

The snowstorm arrived, pretty much as advertised. It's now Tuesday morning and it's been snowing for over 24 hours. It's hard to tell, but it looks like around ten to twelve inches have fallen. Yesterday was a lazy day spent inside. I ventured out only once or twice to do some shoveling. The snow started off pretty wet and heavy, so lots of the trees and shrubs are bent over and sagging. But the last few inches have been lighter and fluffy, so things are looking very pretty.

Meanwhile, Doreen has been tromping around Bolivia. She recently returned from some salt lakes in the western part of the country where she saw flamingos. She sent the the following picture. Pretty cool. 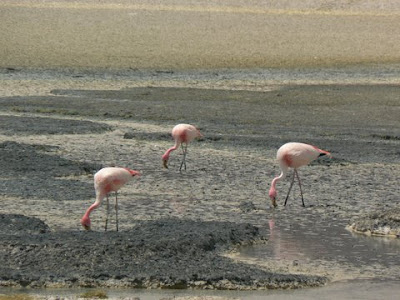 Time for me to finish my coffee and extract my car and head onto campus. The roads appear to be in pretty good condition. So I should head in and get some work done. Since I didn't do much yesterday, I'm feeling like I'm behind where I'd like to be. I had a lot of momentum from my week in Santa Fe which I don't want to lose.
Posted by dave at 10:08 AM No comments:

After a long day of travel I've made it back home. The house is cold, but I have a big fire going so it should warm up soon. The cats are fine and I don't thnk any of the plants died.

I made it here just in time. A messy storm is supposed to hit us tomorrow and last for a little more than a day. Eight to fourteen inches of wet snow and fifty mile an hour winds. I hope we don't lose power.

I better water at least a few of the most thirsty-looking plants before I go to sleep. It's good to be back. I'm looking forward to a long night's sleep with a cat curled up next to me.
Posted by dave at 10:52 PM No comments:

I am dpf on citeulike.org.